There are different drill press parts and functions you need to understand before buying the best drill presses for the woodworking projects. Knowing these important aspects will also help you to learn to drill in the first phase of drilling.

If you are a professional woodworking expert, then you may know about these functions, but if you are new, details on these drill press functions and parts will enlight you.

Understanding the different drill press parts and functions is important to run the woodworking project with ultimate perfection. Understanding these parts will also help you to review a drill press better before buying one. Let’s find out the function in below section.

Motor of the Drill Press

Drill presses incorporate three major assemblies – the head, which holds, turns, and feeds the drill bit, the table, which supports the work, and the column, which supports both the head and the table.

The head holds the motor, which turns a spindle in a movable quill. Attached to the bottom end of the spindle is a chuck to hold drill bits.

Typically, the power from the motor is transferred to the spindle through a speed changer (such as step pulleys or variable-diameter pulleys), letting you adjust the speed at which the drill bit turns. To feed or retract the bit move the quilt vertically with the quill feed levers.

The depth stop limit feature is one of those less discussed drill press parts and functions. Nevertheless, understanding it is also important. Use the depth stop to limit the quill travel and the quillwork to secure the quilling one position. The  Drill press table rests just under the spindle.

A tilt adjustment changes the angle of the work surface from side to side, and a height adjust, raises, or lowers the table.

The head is fastened to the top of the column, while the drill press table slides up and down it. The bottom of the column is mounted in a large, flat base. The base rests on the floor, a workbench, or a stand. Note: On many drill presses, the base doubles as another table and is sometimes referred to as the lower table.

Its ground flat to support work that is too tall to rest on the main table. Not all drill presses have these components, of course. Small, inexpensive presses have simpler drivetrains. They may lack quill locks and table height adjustors.

Many older presses also have notable height adjustor – you must loosen the table lock and slide the table along the column to change the table height. Industrial presses often use tapered Sockets to mount bits, rather than adjustable chucks.

Drill Press Bit and Its Functions

On a drill press, a drill bit is mounted in the chuck. The chuck is fastened to the end of a spindle, which rotates inside a movable quill. With that, the motor turns the spindle, and a speed changer lets you adjust the speed at which it turns.

You can move the quill vertically with a quill feed, limit its travel with a depth stop, or secure it in one position with a quill lock. So, the motor, drive train, quill, and quill adjustments are all encased in or mounted on the head. This is one of those important drill press parts and functions that have effects on proper drilling.

The table rests just under the head. The table tilt adjustment changes the angle of the work surface, the table height adjusts or raises or lowers it, and the table lock secures the table in position. Both the head and the table are mounted on a column, and the column rests in a base.

When you use a geared chuck key to turn the ring gear and the outer sleeve clockwise, a split nut inside the chuck pushes the jaws through angled holes in the chuck body, bringing them closer together to clamp the bit. Turning the ring gear counterclockwise pulls them apart and releases the bit.

Many industrial drill presses are fitted with sockets rather than chucks. These sockets are machined with a standard locking taper to hold drill bits with tapered shanks. (Locking tapers have a slope of fewer than 7 degrees. 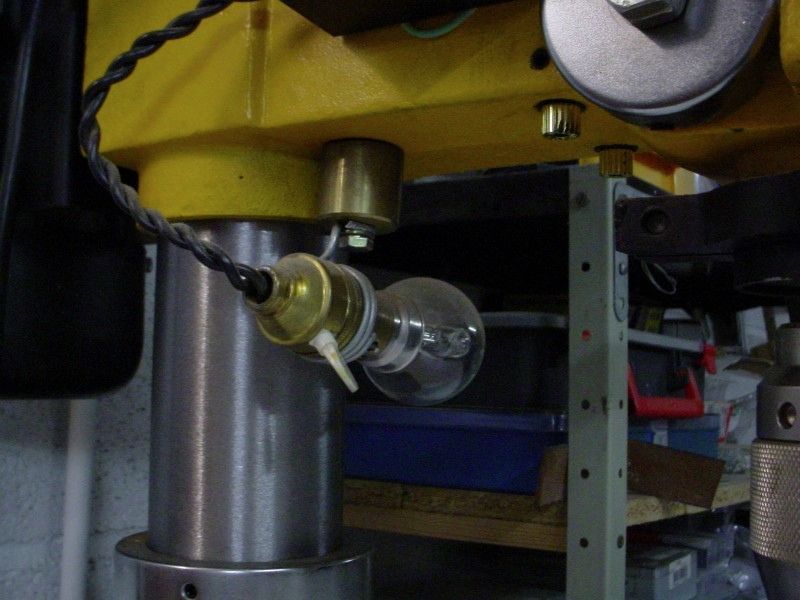 There are several standard systems, the most common of which are Morse tapers.) The advantage of this system is that the bits are easier to mount and release. To mount a bit, simply slide it into the socket quickly. To release it, use a wedge-shaped drift pin, as shown.

Size of the Drill Press Bits

Drill presses have different types of capacities that determine the sizes of the bits you can mount and what work you can do with them. Moreover, the chuck capacity is the largest drill bit shank that particular chuck will hold.

Drill presses also have different capacities. The chuck Capacity – how wide the jaws will open determines the largest drill bit that you can use on that machine. The throat capacity – the horizontal distance from the chuck to the column – determines how far you can drill a hole from the edge of a workpiece.

Manufacturers often double the throat capacity of a press when advertising their machines, telling you their “16-inch drill press” will drill to the center of a 16-inch-wide board – meaning it has an 8-inch throat capacity.

The floor drill press usually stands between 52 and 76 inches tall, and the base rests on the floor. Therefore, this offers a large work capacity – if you need to, you can swing the table out of the way, rest a big workpiece on the base, and drill it. Photo courtesy of Delta International Machinery Corporation

The bench drill press is typically 22 to 46 inches high, and the base rests on a workbench or tool stand. Because of this, it has a much smaller work capacity than a floor model. However, its capacity is adequate for most woodworking operations, like making a wood pen, rustic rack etc. And to be fair, you can use the space under the drill press to store bits and accessories.